There are many different types of spiders in Southern Utah. However, the most common spiders seen in Southern Utah would be Black Widow Spiders, Wolf Spiders, and Camel Spiders (aka Wind Scorpions or Sun Spiders). The weather in Southern Utah is getting a little colder and the spiders are looking for a warm place to stay. Make sure your home is ready for spiders invading by setting up an appointment with Morgan Termite & Pest Control today at (435) 673-9172. Each spider lives differently and needs different things to survive but most spiders don’t like the cold. 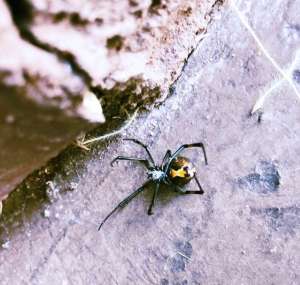 t them but only when they have been well fed beforehand. Male black widow spiders tend to select their mates by determining if the female has eaten already  to avoid being eaten themselves. They are able to tell if the female has fed by sensing chemicals in the web. Their webs are almost always built close to the ground and mostly on block walls. They are only active at night and should be avoided. They are a very skittish and shy spider unless there is an egg sac present.

Wolf Spiders: Wolf Spiders are ambush spiders, they don’t usually build webs and can be found roaming on the sidewalks at night. Wolf Spiders are wanderers without permanent homes. They are often found living in man made locations like, sheds and different outdoor equipment. They aren’t poisonous though and will only bite if handled. They are large brown and grey spiders that are more commonly found throughout the summer. Females carry their young on their backs and can still be active hunters. Wolf spiders are considered the only type of spider to carry their newborn spiders for weeks after they are born until they are big enough to go on their own. Wolf spiders have eight eyes and are considered to have the third best eyesight out of spiders, only beaten by jumping spiders and huntsman spiders.

Camel Spiders (aka Wind Scorpions or Sun Spiders): Yes we do have camel spiders here in Utah, this spider goes by several names such as camel spider, wind scorpion, sun spider, and even vinegaroon. This spider is highly aggressive and not meant to be trifled with. It is a larger spider and is luckily not venomous, though the bite is highly painful and some people complain of a vinegar taste in their mouths. They are light colored spiders, mostly tan with some brown on the abdomen. Even though they are called spiders and scorpions they aren’t really either of those. They are just similar to those in the way they look and the things they do to survive. This species goes by many different names.

Pest Control – 5 Ways It Can make Your Holidays Merrier